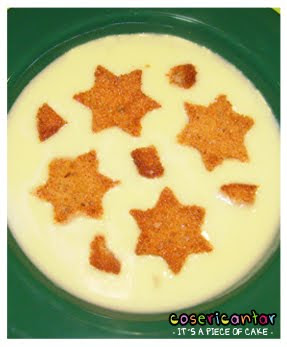 WIKI NOTE:The origins of Vichyssoise (leek soup) are a subject of debate among culinary historians; "the origin of the soup is questionable in whether it's genuinely French or an American creation".
Louis Diat, a French chef at the Ritz-Carlton in New York City, is most often credited with its (re)invention. In 1950, Diat told New Yorker magazine: "In the summer of 1917, when I had been at the Ritz seven years, I reflected upon the potato and leek soup of my childhood which my mother and grandmother used to make. I recalled how during the summer my older brother and I used to cool it off by pouring in cold milk and how delicious it was. I resolved to make something of the sort for the patrons of the Ritz".

1. Wash the vegetables well. Peel and chop potato into big pieces. Chop the leek (white part).
2. Heat the olive oil in the pot. Saute the leeks until transparent.
3. Add the potatoes into the pot. Stir several minutes with the rest of the ingredients.
4. Cover with water (the water has to exceed a couple of fingers the ingredients) and cook the vegetables for approx. 20 minutes. When the veggies are tender, turn off the cooker/stove and remove the pot from heat.
5. Add the milk. Mix everything with the blender until creamy. Then simmer for about 5 minutes. Add the white pepper, nutmeg and salt, to taste.
NOTE: If the texture of the soup is too liquid, add a few tablespoons of cornstarch (corn flour refined). If the texture is too thick, add some more water.
6. Serve the soup warm or cold.

1. Toast some slices of bread. Cut out several stars (cookie cutter - star shape) and cut the leftover bread into small cubes.
2.Heat the olive oil in a small saucepan. Fry the stars and the small cubes of bread, until golden brown.
3. Remove from pan and drain it with kitchen towels. Season (with salt, black pepper, chopped parsley), to taste. 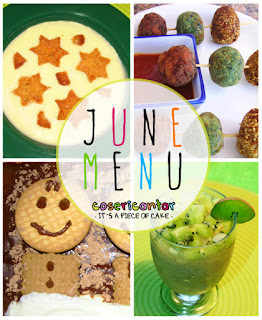 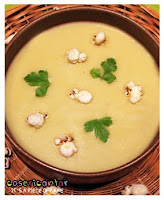 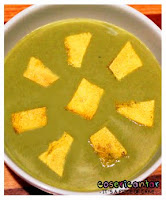