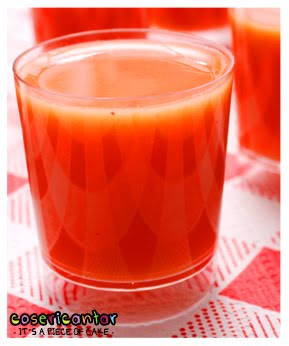 WIKINOTE: Watermelon (Citrullus lanatus) is a scrambling and trailing vine in the flowering plant family Cucurbitaceae. The species was long thought to have originated in southern Africa, but this was based on the erroneous synonymization by L. H. Bailey (1930) of a South African species with the cultivated watermelon.
--
WIKINOTE: Gazpacho  is a soup made of raw vegetables and served cold, usually with a tomato base, originating in the southern Spanish region of Andalucía. Gazpacho is widely eaten in Spain and neighbouring Portugal, particularly during the hot summers.

YOU WILL NEED:
400g watermelon
1 small cucumber
2 ripe tomatoes
A quarter of onion
A quarter of red pepper
50g stale bread
A splash of extra virgin olive oil
A splash of cold water
A splash of vinegar (optional)
Salt, to taste
NOTE: The recipe is for a jug of gazpacho.

LET´S COOK!
1. Cut the stale bread into thick slices. Put into a bowl. Cover with water and wait for a while. Strain the contents and put into a jug.
2. Wash the vegetables well. Peel the tomatoes and chop into cubes. Chop the cucumber, onions and red pepper into cubes. Add the chopped veggies into the jug.
3. Chop the watermelon into cubes, carefully take out the seeds. Put into the jug. Add a splash of cold water and mix it well with a blender.
4. Add a generous splash of extra virgin olive oil and a splash of vinegar. Add salt / black pepper, to taste. Mix it with the blender and at the same time gradually add water, until it forms a fine pulp texture.
5. Cover the jug with cling film and put it in the fridge for a while. The gazpacho has to be cold to serve. 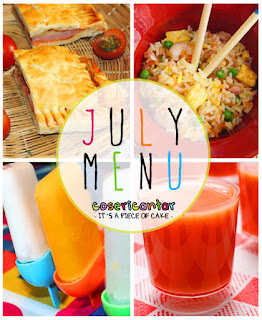 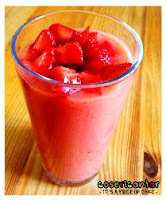 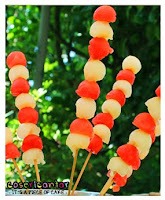